“It’s all part of the adventure” is a euphemism backpackers like to use when best laid plans turn to shit. You have to expect a few bumps in the road whilst traveling, but then there are times when things go so far off plan that you find yourself waking up in Nicaragua’s seediest hotel on the morning of your 33rd birthday.

Being the cheap-o traveler I am, I skipped the tourist shuttle and took the local ‘chicken’ buses to travel from El Salvador to Nicaragua. Chicken buses are a slow but cheap’n’cheerful way of getting around Central America. Called ‘chicken buses’ by tourists because they are sometimes used by people to transport live animals, they are usually old American school buses, often brightly re-repainted with a bit of an “I love Jesus” theme. They rattle from town to town and just when you think another person could not possibly fit, two more get in. At every stop, shop vendors stream onto the bus selling everything from hot food to pens. We even had a couple of buskers come one and play some songs at one point.

Taking the chicken bus from El Salvador to Nicaragua is a long day with multiple bus changes and involves crossing into Honduras for a couple of hours. It was interesting, but exhausting, so when a man I talked to in the immigration line at the Honduras/Nicaragua border, offered me a ride all the way to León I happily accepted. Sweet. Saves me getting yet another bus. He also offered a ride to a young, German gap-year kid and I assumed we’d all be going in a car. We followed him out of immigration to where this was parked 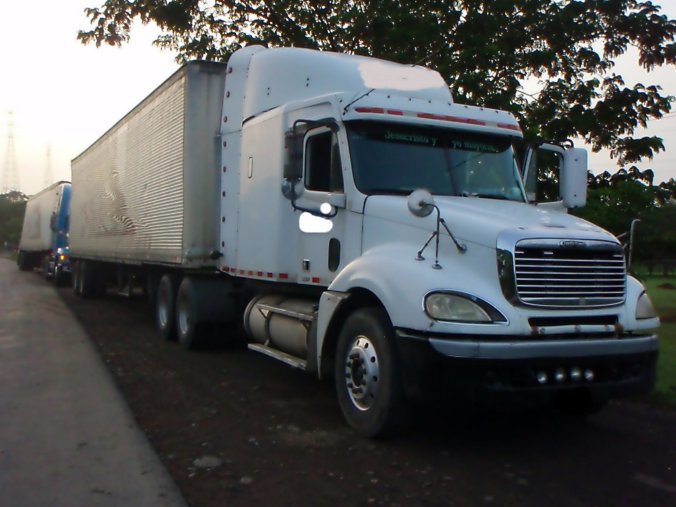 With only two seats, David was to go in one truck while I was to ride in another with his mate.

Admittedly, I did have the thought of;

“Hmmmm is it really smart to be hitching a ride in a truck in Nicaragua at night?”,  but I figured old-mate didn’t use truck driving as a front for kidnapping backpackers, so I told myself to relax.

My driver and I attempted a bit of conversation, but the language barrier made it difficult, so we settled into a comfortable silence. Barely fifteen minutes into our trip, the driver’s phone rang and I tuned out as he chatted away in Spanish. When he hung up the phone, he turned to me and said something that sounded like,

“The roads are too dangerous to go further, so we have to turn off and spend the night at a truck stop.”

My Spanish is poor, so surely I misheard. I did not just hear we were going to be spending the night at a truck-stop. If I had to make a list of all the places I would least like to sleep, a truck-stop in Nicaragua would be near the top.

“Oh Lord, what have I gotten myself into?”

As we pulled off the road and into the truck-stop all I could do was say a silent thanks to any god that wanted to listen that Gap-Year David was there as well. David spoke fluent Spanish so he headed on over to the local trucker bar and asked if there were any hotels around while I stood around and tried not to think about what a bad idea this had turned out to be. David came back with the news that there was a hotel, half a k up the road. So off we went. As we walked, David told me that his truck driver had told him that he had received a call and up ahead people were throwing rocks at trucks and attacking them.

I was a bit nervous walking down the road at night, but we didn’t have a whole lot of options. Ten minutes later we arrived at Nicaragua’s seediest hotel. I think they took their design inspiration from a sort of brothel/gaol cell fusion look.

It was a window-less concrete block of a room with a supply of free condoms and water-proof covers on the mattresses. I think it’s where truckers take their ladies of the night and I am sure you could pay-by-the-hour if you wanted to.

I am not sure I even want to know what this thing next to the bed is meant to be.

Did I mention it was my birthday?

The truck drivers had told us that they were leaving again at four-thirty in the morning, so we were both up again before the sun came up. As we walked out of our hotel, a police officer who randomly happened to be standing there, told us to be careful, because it was dangerous to be walking around.

We made it back to the trucks and the drivers kindly drove us to León without a drama.

I think I’ll be taking the bus from now on though, and I’ve promised Mum, no more hitching rides with truck-drivers.

23 thoughts on “Chicken Bus’n it to Nicaragua.”

Home alone for the first time.